Impressive 1st and 2nd place for Repsol Honda at Misano

The Emilia-Romagna Grand Prix began with rain as the protagonist at the Misano Marco Simoncelli circuit. Both Marc Márquez and Pol Espargaró got to work quickly in free practice 1, both being able to improve their times throughout the session, going faster even when the rain fell heavier. Marc finished in second position, demonstrating once again the improvements he has made throughout this season.

Conditions would slowly but steadily improve as the day progressed, the sun even made a brief appearance during free practice 2, but the circuit remained wet throughout the remainder of the day. Improving his time by 0.9 seconds, Márquez finished Friday's second session in 14th place and 14th overall as well.

Espargaró's 1'45.204 in Free Practice 1 saw him finish the morning in 15th place, 1.4 seconds behind his teammate. Then a crash at Turn 13 forced Espargaró to finish the session, albeit unscathed. Even so, # 44 was able to recover and take advantage of the afternoon session, where he reduced the distance with Márquez to more than half.

Saturday morning started in the same way as the day before. The rain fell lightly, but steadily on the Italian circuit, which made things difficult for the riders. However, Marc and Pol showed their speed in the wet, both setting good times during the day.

Espargaró's last fastest lap (1'33.313) provisionally brought him to the front row with just seconds to go. Ultimately, he finished in the second row, but it was still his best place on the grid since his pole position at the British GP.

Marc was not so lucky. He fell during free practice 4 after changing tires, and did not return to the track until Q2. Another crash at Turn 6 forced Marc to leave the track. However, and despite the problems suffered during the day, the # 93 posted a 1'33.850 that placed him in seventh place on the grid, one row behind his teammate.

Things changed on Sunday, which already started very well for Marc, starring in a lightning start and moving forward from the third row of the grid to immediately go into the contest for the podium. A crash by Jack Miller left Márquez and the winner of the first Misano race, Francesco Bagnaia, alone, who immediately created a wedge between them and the other riders. The pair traded fast laps, keeping the # 93 within a few tenths of the Ducati for most of the race. In the final laps, Bagnaia seemed to have an advantage over Márquez, who reduced his pace to ensure a safe second, but a sudden crash from the Italian rider led Marc to the lead of the race, an advantage that he maintained until the end to get his first consecutive victories since the Japanese and Australian GPs in 2019.

Pol made an equally strong start from fourth to move quickly behind Marquez. Oliveira, who was following close behind, exerted constant pressure on # 44, but was unable to overcome it. When Bagnaia fell, Pol rose to second place in the closing laps. This second position seals the first podium for # 44 in the Repsol Honda colors, Espargaró's best result to date in the premier class and the first 1-2 position for the Repsol Honda team since Aragón 2017.

Márquez now moves to sixth place overall with 142 points, while Pol finds himself in a close battle for eighth place with Maverick Viñales, awaiting the penultimate round of the season at the Algarve circuit, Portugal.

We congratulate Fabio Quartararo and Yamaha for their victory in the 2021 MotoGP World Championship. 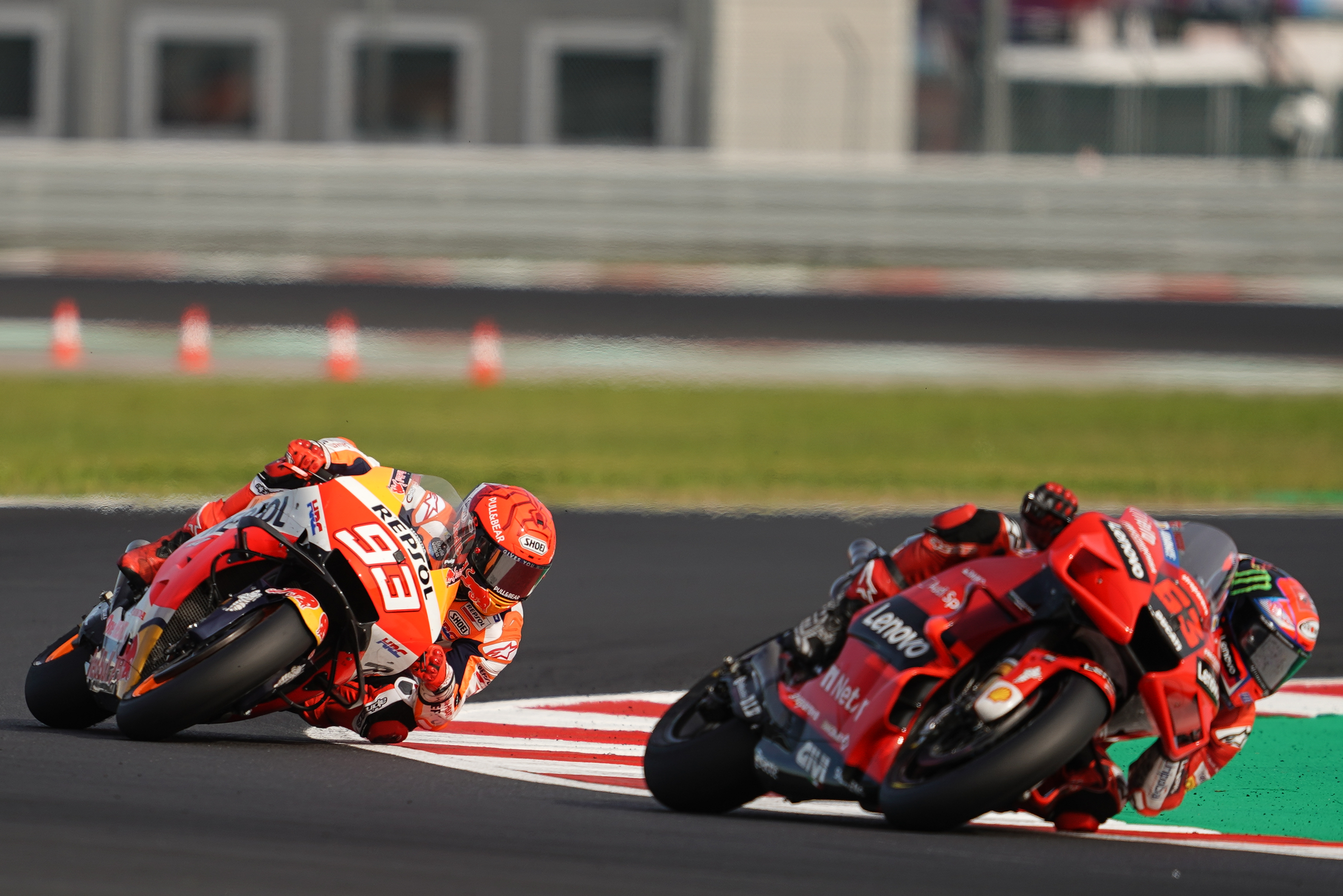