Marc Marquez took a back-to-back victory at Brno today in challenging conditions, his third this year and the 58th in his career, extending his championship lead to 14 points over his closest follower.

It was the fifth flag-to-flag race that Marc has perfectly mastered thanks to a mix of tactics, determination, and teamwork (Assen 2014, Misano 2015, Argentina and Sachsenring 2016, Brno 2017). On this occasion the Spaniard found himself struggling soon after the lights went off, having fit a soft rear tyre that he wasn’t at ease with on a drying track. He therefore decided to change bikes quite soon and entered the pit on lap two, where his team was ready with his second bike fitted with slick tyres. That allowed him to pull a great gap on his opponents, which he managed until the chequered flag.

To complete the excellent day of the Repsol Honda Team, Dani Pedrosa achieved a strong second place, bringing his career podium tally to 150 (and his MotoGP podium tally to 109, one more than Jorge Lorenzo). Dani switched to his second bike on lap four and re-entered the race in eighth position. He immediately started riding at a very fast pace, fighting his way forward to second and setting the fastest lap of the race along the way.

Marc and Dani were happy to have been able to honour the “Maestro” Angel Nieto, 12+1 World Champion, with their great performance. Nieto passed away on Thursday.

Tomorrow the Repsol Honda Team will remain at Brno for a one-day test before heading to the Red Bull Ring for the next Sunday’s Austrian GP. 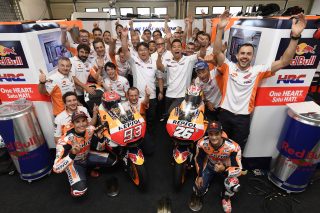 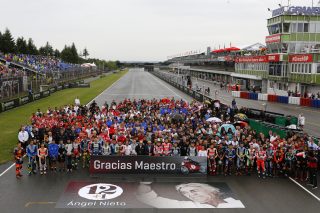 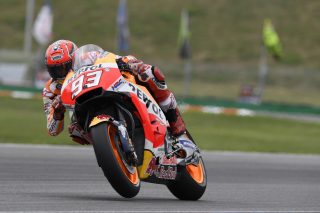