One day after Jonathan Rea (KRT) had clinched the Riders’ title in the FIM Superbike World Championship Kawasaki Racing Team took the Team’s championship too, after a dramatic second race at Magny Cours.

Tom Sykes (KRT) finished seventh after a gritty performance in the second 21-lap race in France but new champion Jonathan Rea (KRT) was forced out after his footpeg clipped a fallen rider’s bike and broke off, also injuring his right foot. Entering the pits for bike repairs and a new race boot, he was eventually forced to retire in pitlane.

Sykes had finished the first lap in fifth position, after a third row start, which was required under the new reverse grid rules that operate in WorldSBK. Tom gradually lost ground as he lost rear traction and was to finish seventh, unable to reach the podium level he had shown in race one due to a less than optimum tyre choice today.Carrying left hand injuries from a heavy crash that made him miss the previous races in Portimao, Sykes still battled hard to the finish well and maintained his overall second place in the championship points.

The race was a difficult affair for all, as the threatening rains arrived in a very light form, and slowly got heavier as the laps counted down.

With two rounds and four individual races remaining this season Rea and Sykes have amassed enough points between them for KRT to add the a third Teams’ Championship to Rea’s third Riders’ title win in succession.

The battle for the Manufacturers’ crown will go forward to the next round at Jerez de la Frontera, with racedays on 21st and 22ndOctober. 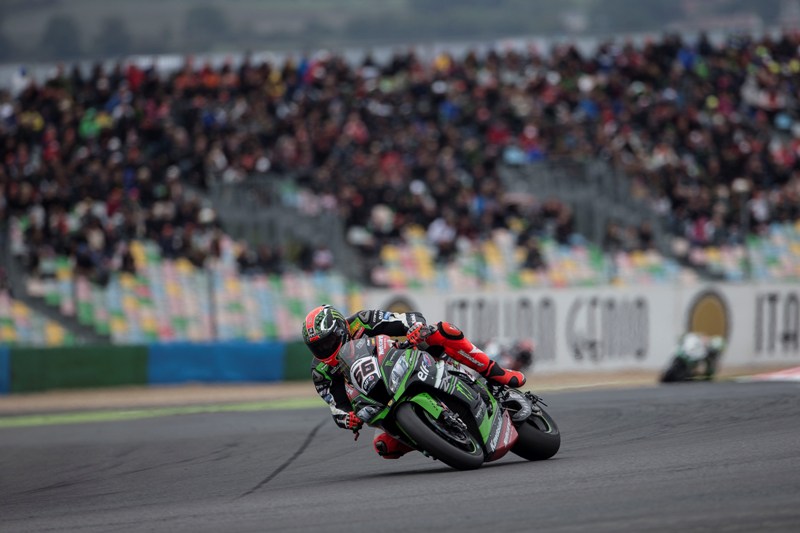