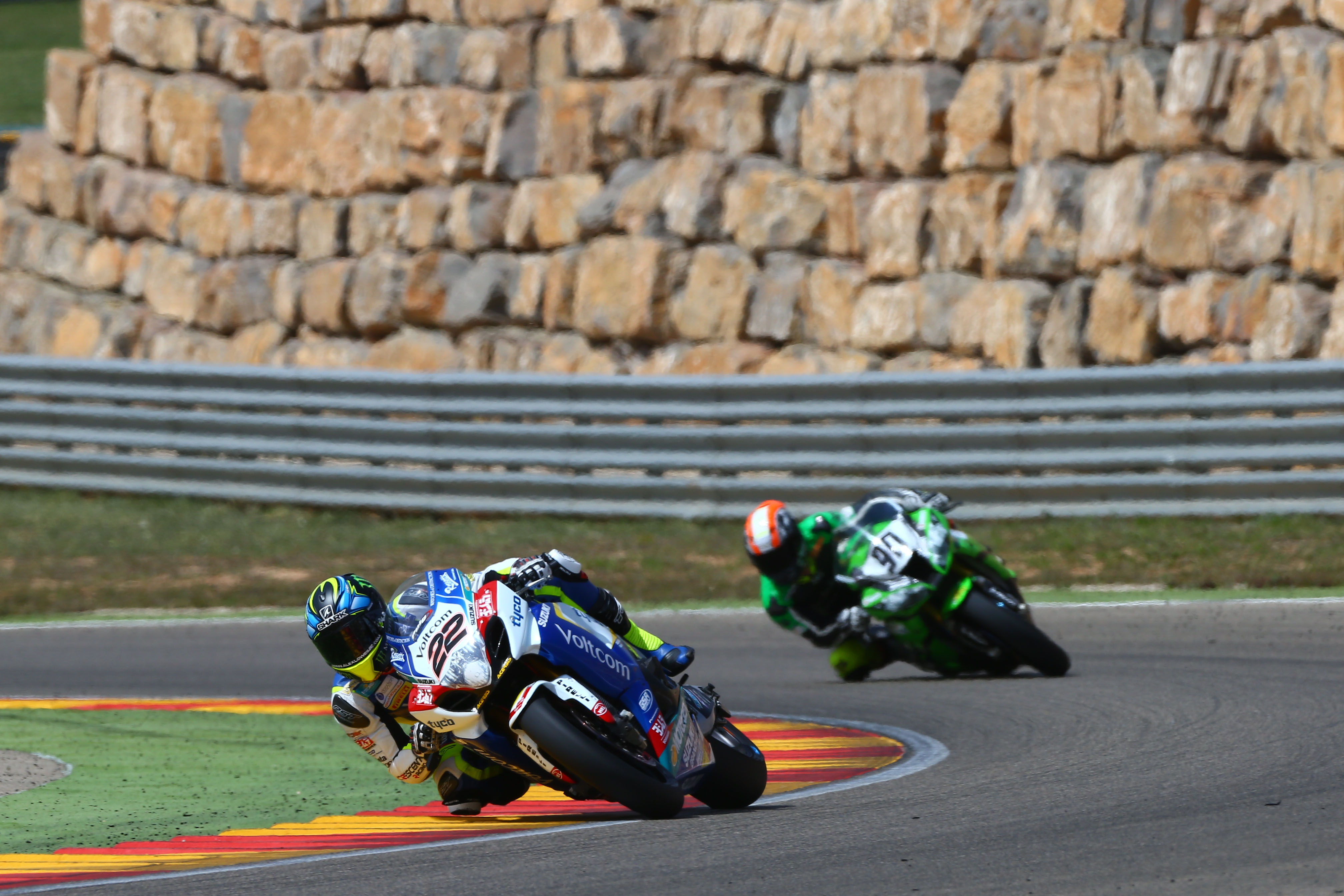 De Puniet showed consistently improving pace throughout the afternoon’s action, progressing from his 19th grid start to manoeuvre his Yoshimura-powered GSX-R to 12th by the sixth lap. The final stages of the day’s racing saw the Frenchman battle with Román Ramos (Go Eleven) swapping places a number of times before claiming 13th at the line. Lowes laid his race one problems to rest with a great start in the second outing. However, an early engine brake control issue saw him run off at turn eight on the first lap and re-join at back of the pack. Head down, the British racer fought his way through nine riders to position his Suzuki GSX-R1000 in the points by lap 11. Exhibiting the speed and control that could have seen him fighting for sixth, Lowes battled bravely, coming home in 14th with two Championship points and an understanding of the potential to come. The morning’s race was fraught with tension after a launch control error at the lights threatened to end Lowes’ race before it had begun. The weekend’s continuing electronics development returned both riders to the pits after five laps – while Lowes re-joined for the remainder of the race and continued to circulate evaluating the system and collecting valuable data, de Puniet was forced to retire after seven laps on track. A dramatic last lap battle saw Kawasaki’s Jonathan Rea clinch victory in race one by just 0.05 from Ducati’s Chaz Davies, the Welshman responding to the earlier battle by safely securing the race two victory with a three second margin. Development of the GSX-R’s new Magneti Marelli system continues in earnest for Voltcom Crescent Suzuki as the team heads directly from Spain to the Netherlands for the fourth round of the eni FIM Superbike World Championship taking place at Assen’s ‘Cathedral of Speed ‘on Sunday 19th April. Alex Lowes: “There is no getting away from how difficult it has been this weekend, I did my best today and I really don’t feel I could have done a lot more. There’s no point explaining the problems we’ve had with the new system but I’m frustrated, both for me and the whole team, as the guys have shown so much commitment to moving this project forward but it just wasn’t to be this weekend. I’m still convinced that we will have a more competitive bike when it’s all dialled in and when we’re challenging for podiums again, whenever that may be, it will make the work we’ve done this weekend feel even more worthwhile.” Randy de Puniet: “We knew it was going to be a very difficult weekend, but maybe I didn’t expect how difficult! We have learnt many things, the first race the bike was impossible to ride, with too many technical problems – I pulled in three times to try to solve them but eventually we had to stop. For the second race we decided to change the strategy completely and although it was far from perfect it was much better. I finished 13th but was close to 11th, so maybe there was potential for more. We are still far from where we want to be and we need to find the solution quickly, so we will see in Assen how far we can advance. My thanks to the team for their effort during a difficult weekend, I gave my best and so did they. Now it is time to take the information gained and improve for the next race.” Paul Denning: “We had hoped to make good progress over the course of the weekend with the new Magneti Marelli system but unfortunately in terms of outright potential that wasn’t the case. We have definitely learnt a lot and we will have a much better base for Assen in a week’s time but after Assen we are going to need a significant amount of detailed development to get back to where we were, and then to progress and exploit the full potential of the new system. “Alex honestly made the bike look better than it was and did an incredible job under the circumstances. His pace for the last ten laps of race two was faster than the sixth place finisher – which given the problems he was encountering on track reaffirms the potential of the package and gives us confidence that we will be able to recover well when things are right. “I would like to also thank Randy for his patience and his efforts this weekend, at least both riders seeing the chequered flag and scoring points in the second race was an outcome we can build on. “It was great to see all the guests from Tyco Security Products here in Aragon this weekend and I would like to also thank Suzuki and Title Sponsors Voltcom for their supportive attitude during this process. We will improve and we look forward to putting the Voltcom Crescent Suzuki back into the fight with the front group as soon as possible.”